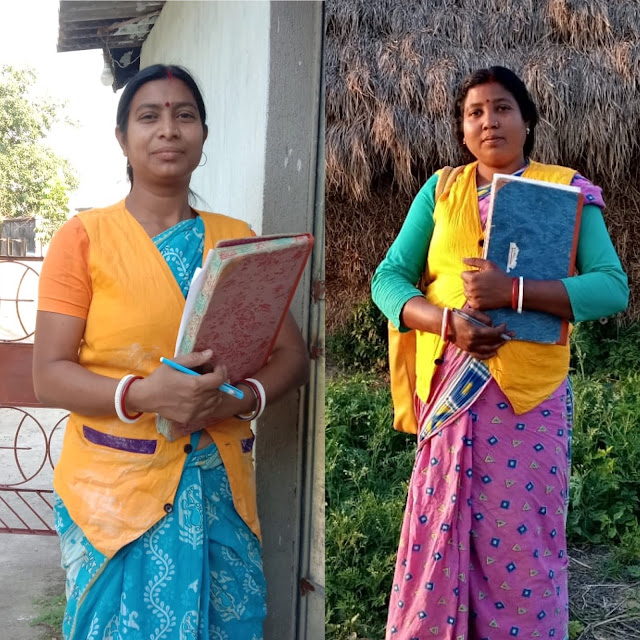 (File Image: Chinu Mandal (Left) and Rakhi Singha (Right))
ACF works with over 144 Sakhis across locations, and today they are playing a major role working closely with the village health authorities in restricting the entry of COVID19 into the villages we work in. ACF spoke with two Sakhis from Farakka, West Bengal, who are working rigorously to curb the virus.

Chinu Mandal and Rakhi Singha have been associated with Ambuja Cement Foundation for the past 6 years receiving health training and becoming Sakhi's in 2014. Rakhi Singha in 2018 also got absorbed as a government ASHA (Accredited Social Health Activist) worker but has still been associated with ACF - providing her support in the Maternal Child Health Program. Recently for her efforts in getting pregnant women to hospital in spite of the intense floods in Farakka, she was felicitated for her work on a district level. While both were selected through Self-Help Groups, today as frontline workers they are overseeing the health of over 5-6 villages of the Farakka district. 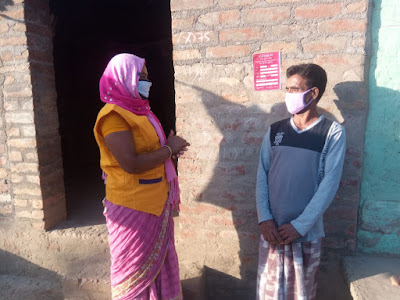 (Image: Sakhi creating Awareness in the village)
"During the awareness phase of the virus, we received training and information from the ACF health team and the health authorities about COVID19. This led us to initiate awareness sessions amongst villagers in the early stages itself." Said Rakhi.

Farakka is known as one of the most marginalised communities situated close to the border of Bangladesh. Chinu explains that "Villagers from the community mostly prefer to migrate to the city to earn better income for their families. However, with the current situation of most of them returning to the villages, the village health authorities are carrying out precautionary measures in the communities."

Chinu plays an important role at this stage. "In close association with the health authorities, my role is to track those who have just returned from the city, make them aware about the quarantine period and also inform the village health authority." 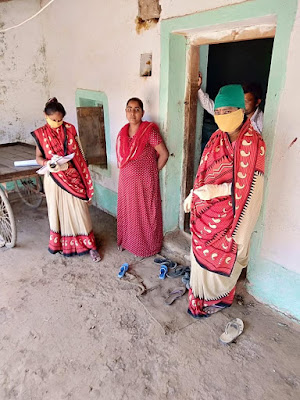 (Image: Sakhi tracking villagers and creating awareness in the family)

On the other hand, Rakhi checks if they are developing any symptoms, that temperature is normal and also provides them with information leaflets. They explain that though the Chief Minister assures that Covid-19 treatment centres will be installed immediately, the closest testing centre to Farakka is only in Kolkata which is around 282kms away. "If by chance any throat swabs need to be tested, it would take not less than a week to get the results. As there is no isolation ward at block level or at community health centres, the available ward is in Jangipur which is 45kms away from Farakka. Thus we have to be very careful and assure that villages take strict precautions during this period." Rakhi says.

But not everyone is taking the situation seriously. "People in a few villages are still taking the situation lightly by roaming in the area and gathering in community places. In such cases, we have to go along with police personnel to send them home and ensure that their family closes their doors." Chinu said.

During the day, Chinu and Rakhi take many self-precautions - using sanitizers, masks, and avoiding touching any surfaces that the virus could be present on. Since Rakhi works more closely with suspected patients, she assures that she uses personal protective equipment that has been provided to her. When she returns home, the whole gear is kept outside her house and she has a full Dettol bath.
"Our family has been very supportive of our work on these health programs - whole heartedly allowing us to continue doing our important work in this crisis. They know we have always been committed to our work, receive a lot of gratitude from the villagers and also feel proud for the work we do." Rakhi said."Yes, if we as Health Functionaries take a back step now then who will protect our villages?" Chinu says.
Though they are busy focusing on the current crisis, they still continue to devote their services towards ACF's Maternal Child Health Program. "It is good that there are no scheduled deliveries on our calendars at the moment and vaccination day is not too close as well. But if any cases arise, we are ready to provide 100% support in assisting women." Rakhi says.

Sending a message to all, "We are fortunate that the virus has not hit our villages yet! However the effort we take during these challenging times is not easy - people can make it easier for us only if they take the right precautions, avoid going out and practice social distancing." Chinu explains. "Since the government announced that there is no vaccine developed as of yet, we still can fight the virus by staying more alert and by being indoors. Only then can we destroy it and return to our normal lives" adds Rakhi.
Tags: Health,Women,Enabling People
0 Comment
← PREVIOUS BLOG
Village Health Functionaries c...
NEXT BLOG →
Self Help Groups turn Health M...