Bolstering the Bargaining Power of Farmers

In the early 2000’s, farmers in the tribal belt on the border of Telengana - Chandrapur were at the mercy of local money lenders, who monopolised the cotton market – often refusing to pay market rates for crops and pushing the already marginal farmers further into poverty.

It was their wives who stepped in to turn things around, harnessing the power of their SHGs to collectively start procuring the cotton at market rates, and on-selling it directly to the local ginner – making a profit in the process. It was a win, win situation.

Formed in 2003, the Jandu Devi SHG has had a long history of entrepreneurship, starting their journey by investing just INR 800 in chickens and turning profits around to reinvest and diversify into new business lines, like goats.

To break the reliance on money lenders, the SHG (with the help of Ambuja Cement Foundation) made a strategy and presented it to the Maharashtra State Livelihood Mission.  The proposal was to enter the cotton trade.  Starting with just 3 SHGs, the group visited a local gin to better understand the business – learning about how to ensure cotton quality and other difficulties in buying and selling cotton.

In the first year, these largely inexperienced and illiterate, yet business savvy women sold 464.72 quintal of cotton – pocketing a profit of INR 1.13 lakh which they partly used to buy sanitary napkins and educational material for adolescent girls and primary children.  The rest they invested into a new business: buying and value-adding toor dal (pigeon pea) and selling it in the market.

In 2020, 33 SHGs bought and sold 1200 quintal of cotton (numbers were down due to the pandemic) – and this time used the proceeds to kick-start the purchase of farm inputs collectively (seeds, fertiliser and pesticides) Once again, their collective bargaining power came to the fore to solve a problem and profit from it. 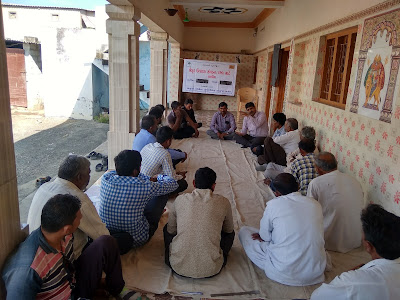 In 2015 ACF initiated the Better Cotton Initiative in 28 villages of Una & Girgadhada block of Gir Somnath, forming Cotton Grower Learner Groups along the way.  Some of these groups visited the Somnath Farmer Producer Company in nearby Kodinar and, on seeing the success of the collective input process, were buoyed to kickstart their own FPO and inputs business in 2019.

A proposal was submitted to NABARD and INR 10.54lakh was sanctioned to help start the FPO with 320 farmers (including 8 women farmers) signing up as shareholders.

They commenced the process for certification of Seed, Pesticide and Fertilizer as per government norms, and started their own Agri Mall in October 2020. Purchasing agricultural inputs as per farmer need through different Wholesalers, they commenced business – serving farmers from 22-25 villages in the area. Till date they have had a turnover of  INR 16.50 lakh of inputs like seed, pesticide, micro nutrient, cattle feed, farm safety equipment – saving farmers money on input costs, and providing an enhanced information service to farmers in the district.

With a robust business plan in place, they plan to move into output collective marketing of groundnut, onion, wheat and gram. 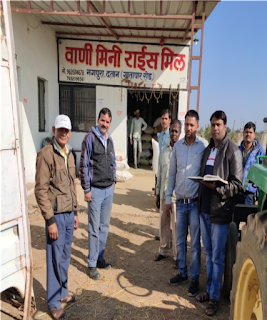 Mitaan Krushak Producer Company Limited (MKPCL) is a farmer producer company dedicated to the production and processing of rice. With a vision of ‘Better Farming, Better Farmer, Better Country’ the group is currently providing services to the farmers through its Custom Hiring Centre (CHC) and Agri Input Shop. Additionally, Goat manure is a product of MKPCL which is being prepared and sold to farmers.

The group was initiated to create an alternative place for rice milling at cheaper cost comparatively, whilst maintaining quality of rice. By setting up their own Mini Rice Mill at MKPCL, the farmers  take the benefits from this facility whilst also ensuring quality rice for household consumption. Currently this is being done by local small mills at a much higher cost with low quality rice milling.

With 221 shareholders, the group has already had a turnover of 21.5lakh and members are benefiting via more prosperous farming enterprises.

Ambuja Cement Foundation has enabled the establishment of 15 FPOs, 3 Cooperatives and 5 Women Federations which are all harnessing the power of collective bargaining, to either reduce costs of bulk input purchases, or to collectively market their produce.  As a result 2.1lakh farmers are today prospering!