58% of India’s population depends on Agriculture as the primary source of livelihood. However, it contributes to only about 18% of the country’s GDP. While food grains, milk, pulses, sugarcane, cotton, fruits and vegetables and several other crops’ production has been increasing year on year, the agricultural yield i.e., the crop produced per unit of land, remains low. This underscores the importance of building farmer capacity in rural India, especially in small farm holdings. The raging pandemic and the lockdown announced exactly one year back, however, warranted the need to look at building farmer capacity through novel means while also laying primary emphasis on the farmer’s health. Here is how ACF’s teams in 3 regions are working against the odds to enable farmers and build capacity in the face of the pandemic.

ACF works with over 40000 farmers In Kodinar, with the major crops grown being Cotton and Groundnut along with Wheat and Barley. Until before the pandemic, ACF’s field facilitators would be out in the villages and farms all day, building and deepening relationships with farmers all the while also educating them and addressing issues. The sudden announcement of lockdown caught the team unprepared, and they hurriedly scrambled to address the situation. It was harvest season, a crucial time for farmers.

In the first 15 days of the lockdown itself, the team realised that the situation may be a long drawn one and immediately established virtual channels of communication with the farmers. The field facilitators, working with 500 farmers each, were asked to form WhatsApp groups of the farmers they collaborated with. While every Farmer did not have WhatsApp and in some cases, even a smartphone, the lockdown meant that families were together the entire day. Consequently, the Field Facilitators were able to map other members in the farmers’ families who could engage through WhatsApp in case the farmer himself did not have the application. As a result of this exercise, over 60% of the farmers were able to receive messaging from ACF’s end. For the rest, a calling framework with clear progress tracking was effectuated to regularly enquire of their wellbeing and build capacities through the medium. In addition, QR codes were highlighted in the villages for farmers to access relevant information.

In the context of information sharing itself, COVID-19 awareness was prioritised to enable the farmers to continue with their farm activities while safeguarding their health. Video and audio messages were created and shared regularly by the ACF team in association with KVK, to ensure that safety protocols are followed. The ACF team also initiated capacity building for the farmers by sending across well scripted, bite sized video clips. The timing of the clips was aligned with the harvesting season of each crop grown in the region. The initiatives were very well received as was evidenced in a study done with farmers. ACF is now using these learnings to further the use of technology for capacity learning as it reduces overall costs and allows the team to reach maximum farmers.

ACF works with over 14000 farmers in this region of Rajasthan; most of them involved in Cotton production. The biggest apprehension among farmers with the onset of the lockdown was whether seeds and other inputs would be available. However, by working closely with co-operative societies and distributors, this fear was allayed by the ACF team. For capacity building, direct calls were made to each of the farmers working with ACF. In addition, farmer groups were created on WhatsApp where training material was disseminated in a fixed schedule. QR codes and voice calls were also used extensively. The frontline field staff being from the target villages itself, allowed the team to connect personally with the farmers despite the lockdown. During the Lockdown, the main areas of work involved INM (Integrated Nutrition Management) and IPM (Integrated Pest Management). The initiatives were moved to a virtual medium through mediums like Google Meet. Short video clips were also created to enable the farmers deal with various issues including dealing with the Locust attacks that occurred during the lockdown. For mass awareness around INM, IPM and COVID-19, narrative wall paintings were employed. Moreover, animated videos were also shared around these areas through WhatsApp and the local cable operators. 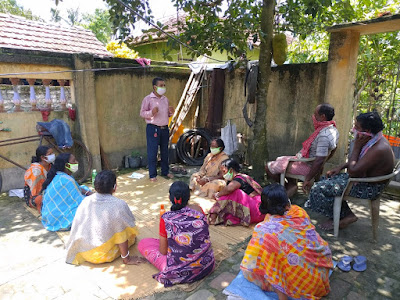 Paddy grown through the SRI technique (System of Rice Intensification) was a standing crop when the lockdown was announced in March. While the team was just about dealing with the effects of the lockdown another disaster struck in the form of Cyclone Amphan. The ‘double vengeance’ resulted in many farmers being severely affected during the period. In addition, fruit and vegetable farmers were also significantly impacted as the scaffoldings received extensive damage. Moreover, because of the lockdown, buyers were few, depressing the prices of the crops. In addition, Labourers were few to harvest the paddy and inputs such as fertilisers were not easily available.

To combat the situation, WhatsApp groups and one to one calling was promptly initiated with the farmers. That being said, many farmers in the region did not have smart phones and one to one calling coupled with group calls was the primary method employed to reach out to the farmers. Just prior to the lockdown, ACF had enabled the creation of 28 farmers clubs. It is through these farmer clubs’ points of contact that information was primarily disseminated, including awareness around Cyclone Amphan and COVID-19. The Points of Contact in these farmer clubs would then further disseminate the information in their own regions.

It was also during this time that new interventions such as Aquaculture through BIO Floc and IPM and INM had been introduced. With the pandemic and cyclone threatening to play havoc to these capacity building priorities, ACF tied up with centres like Krishi Vigyan Kendras and agricultural universities in the region to offer online classes to the farmers.

As one can surmise, the impact of COVID-19 and the subsequent lockdown has been diverse across regions. As such building farmer capacity in the current scenario requires a deep contextual understanding of the region, its farmers, and the challenges they face.

ACF’s experience on the ground allows it to efficiently work with farmers and build capacity. To know more about its capacity building programs, write to jagdamba.tripathi.ext@ambujacement.com