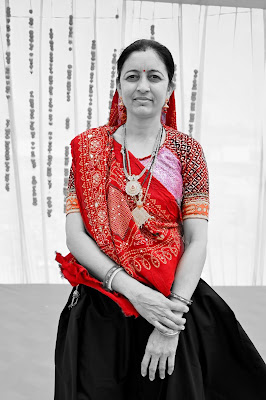 Hansaben Jadhav is no stranger to financial difficulty. When her father-in-law passed away at the age of just 55, she stepped up in life and started handling the financial responsibilities of the family.

Marrying early in life, Hansaben found herself in a conservative family that restricted her movement outside the house. With a ray of hope, she came in contact with Ambuja Cement Foundation and was soon convinced to be a part of a Self-Help Group. She plucked up the courage, raised her voice and this was the turning point of her life.

These hardships proved to be good fuel in driving her to encourage local women to step out of the house and dive into a livelihood. Through her involvement in a SHG, Hansaben was elected as the Director of the women's managed cooperative 'Bhagvati Mahila Milk Co-operation' in 2003. Starting with just 5 women she worked hard to mobilise and engage women, and today 350 women are members of the Cooperative - delivering milk daily to their very own collection centre, 'Sudama Sangh.'

Becoming active in the Sorath Women's Federation, Hansaben worked to solve the issues of women facing problems such as dowry and domestic violence - providing counselling and guiding them on financial support and livelihood opportunities. It was here that she also had a chance to contribute towards the sanitation work of the village. Initially facing resistance, her perseverance saw her succeed in creating 3756 toilets in rural areas.

For these efforts she was honoured by the Chief Minister of Gujarat in 2015 for her outstanding performance in uplifting the rural community, and was named as a 'Gram Mitra', by becoming a member of the local Gram Panchayat Samiti.

What is her vision for the future? More empowerment for women through milk! She wants to register the milk co-operative and establish a milk processing unit to increase production and income levels of women.

- 5 women to 350 women members in the milk co-operative

- Director of the milk cooperative run by women