Farmers Prosper with Off-Season Vegetables, Thanks to Rainshelter & Scaffolding 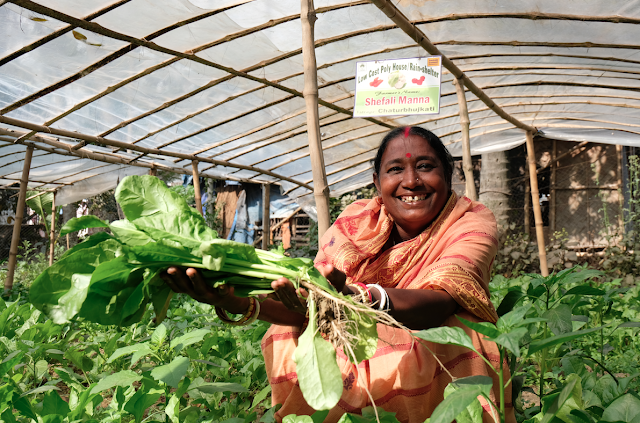 Farmers in Sankrail are capitalising on market fluctuations by harnessing rain-shelters and scaffolding to grow vegetables in the off-season; increasing crop income by 128% (Scaffolding) and 45% (rain-shelters) as a result.


Until recently, the System of Rice Intensification (SRI) had been the main focus area of ACF, Sankrail. However, in 2016-17, ACF shifted its strategy to promote vegetable cultivation along with SRI, based on the identified need among farmers.


ACF's Agro-based Livelihood program was reaching out to more than 5000 farmers, in 40 villages, across 7 blocks of Howrah district. Having established Farmer's Clubs and SHGs to sustain the program, farmers began to share the many issues they were facing in relation to vegetable cultivation that rendered growing seasonal vegetables unprofitable. Issues included:
- Due to lack of knowledge, mostly seasonal leafy vegetables were being cultivated, which are easy to cultivate, but low on profitability.

- In the rainy season, owing to water-logging, vegetables could not be cultivated.

- Creepers were being grown on the ground, and as a result, the quality of the produce was poor - fetching low market prices.

- There was adequate demand in the market but produce of the local farmer was less and the quality was inferior in comparison to the vegetables imported from other states or districts.

- Farmers were dependent on the fertilizer retail shops for disease and pest management.
Buoyed by the challenge, ACF began monitoring both the market prices for vegetables and the supply of vegetables each season. As shown in the charts below, the production peak was not matching with the peak rate, even in the local market. If these crops were to be promoted as the cash crops then the seasons for the crops had to change. 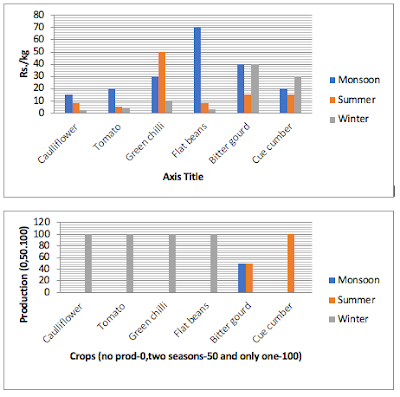 Based on the findings of the need assessment and after prioritizing the need for intervention, the following interventions were piloted and, on success, scaled: 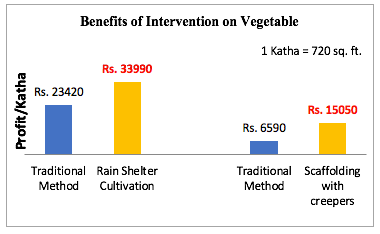