From Punjab to the Olympics - Transforming Attitudes Through Sport! 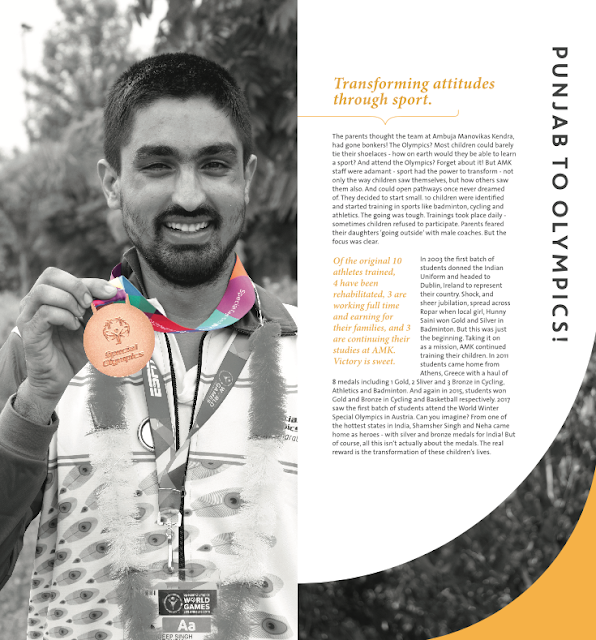 The parents thought the Team at Ambuja Manovikas Kendra (AMK), had gone bonkers! The Olympics? Most children could barely tie their shoelaces - how on earth would they be able to learn a sport? And attend the Olympics? Forget about it!


But AMK staff were adamant - sport had the power to transform - not only the way children saw themselves, but how others saw them also. And could open pathways once never dreamed of. They decided to start small; 10 children were identified and started training in sports like badminton, cycling and athletics. The going was tough. Trainings took place daily - sometimes children refused to participate. Parents feared their daughters 'going outside' with male coaches. But the focus was clear.


In 2003 the first batch of students donned the Indian jerseys and headed to Dublin, Ireland to represent their country. First shock and then sheer elation spread across Ropar when local girl, Hunny Saini won Gold and Silver in Badminton. This was just the beginning. Taking it on as a mission, AMK continued training their children. In 2011 students came home from Athens, Greece with a haul of 8 medals including 1 Gold, 2 Sliver and 3 Bronze in Cycling, Athletics and Badminton. And again in 2015, students won Gold and Bronze in Cycling and Basketball respectively. 2017 saw the first batch of students attend the World Winter Special Olympics in Austria. Can you imagine? From one of the hottest states in India, Shamsher Singh and Neha came home as heroes - with silver and bronze medals for India!
But of course, all this isn't actually about the medals. The real reward is the transformation of these children's lives. Of the original 10 athletes trained, 4 have been rehabilitated, 3 work and earn full-time, and 3 are pursuing their studies. Victory is sweet.