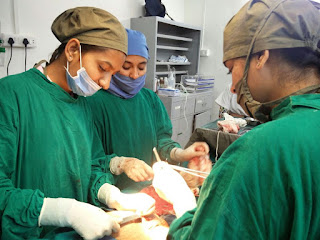 Its World Skills Day this month and to celebrate, we applaud the power of women as family bread-winners and earners.

Today, Sangita, Poonam and Varsha Bharga bring in Rs 30,000 per month to support their family of 7 after the loss of their father, who passed away in 2014, leaving the family with 12 years of health related debt, and no income source.
In order to survive, the mother and sisters opted for daily labour earning just 50 rupees/day. While working as labourer, Sangeeta got to know about SEDI. Hopeful to start her career in right direction, she visited SEDI centre in Kodinar (Gujarat), where she received orientation on various vocational courses. Without much delay, Sangita registered for the course in nursing trade.
After 2 months training at Sidhhivinayk Hospital in Morbi (Gujarat), she took up a job at Janki Hospital as a Staff Nurse in the Gynec Department earning 5000 per month with food and accommodation.  Her sincerity and honesty in her work impressed the Doctors and she was promoted - now earning 10,000 per month.
With such an inflow of money, she supported her two sisters Poonam and Varsha to also study nursing.  Poonam  completed her on Job training from Meru Nursing Home - Bhavnagar, then was sent for a job at Amrut Hospital Baroda with 7000 salary/pm and accommodation. Varsha  is working at Ashutosh Hospital, Rajkot with 10,000 salary.
With a total monthly household earning of Rs. 30,000/- this young  trio is the personification of hard work and strong determination.
Tags: Skills,Women
0 Comment
← PREVIOUS BLOG
The 'License to Thrive'
NEXT BLOG →
MIS Improving Quality of Progr...