How farmers & rural women are coming together to create strong businesses

Working with Farmer Producer Companies across locations, ACF has placed a heavy focus on helping build the capacity of Farmers to generate thriving business models which deliver returns to the people's institutions and its members.  Here are 3 FPOs, supported by ACF, that are making waves in business. 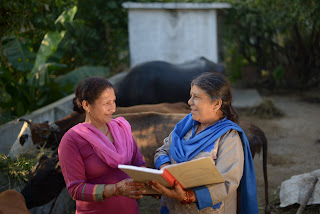 In Darlaghat, Himachal Pradesh, livestock is a major source of income for families. A big challenge however, was access to timely, good quality veterinary care.

Why not train local women with basic veterinary skills? And so ACF kickstarted Pashu Swasthya Sevika in 2008 where 23 local women were trained to provide prompt cattle care on people's doorstep. Things started slowly, but the dedication and promptness of the PSS made them crucial to farmers. Overtime, they became linchpins of the community.


ACF saw an opportunity to strengthen the PSS role - by staring a dairy business! The cattle they treated were healthier, and milk production was abundant. All they needed was guidance, and a market. The PSS were charged up! Confident now, they too wanted to unleash their potential. ACF devised a business plan for the project, and the PSS quickly convinced farmers to join the venture - registering their own Farmer Producer Organization in 2016, with 37 women shareholders.


The FPO not only channelized collective milk supply, but also collectively procured low cost, high quality fodder from cities. Within 12 months, more women came forward, until over 150 women joined the FPO, and cattle numbers swelled from 487 (2008) to 1221 (2016).


The results? In 2018, women's earnings increased by Rs 5000 per month per member, and FPO turnover was Rs 40 lakh, with Rs 2.5 lakh profit. The PSS are still not content. They now have their sights set on launching a Dairy Cooperative! The sky is the limit! 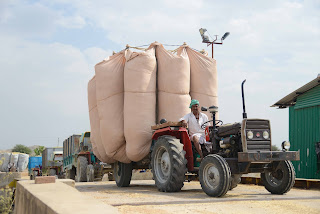 It's a familiar sight. Farmers burning chaff in a field after harvest. It's harmful for the environment, the soil, and for health. There is also a financial cost to farmers.

Farmers from Rabriyawas, Rajasthan found a solution and began selling their biomass to local brick manufacturers - pocketing some income as a result. But they soon realized that middlemen were taking advantage. In a meeting with ACF, they suggested selling biomass to ACL - providing an alternative fuel for the company's huge furnaces.


Team ACF was excited! They could not only help farmers, but the company and environment in the process. Taking it forward, ACF encouraged farmers to form and register a Farmer Producer Company. But the pesky middlemen didn't take the change lying down. They threatened farmers, and spread rumours - the project needed a critical mass to be successful, and rumours created doubts among farmers.


However, ACF continued to convince farmers to take part. But farmers worked in their fields from early morning to late night, and ACF was pushed to its limits - forced to conduct night meetings with farmers in remote areas. Slowly farmers saw the benefits - rates were fixed, the FPC commission was only 15% of the middlemen commission, and farmers were paid transparently, via cheque.

Since 2012, the Rabriyawas FPC has supplied 100,000 ton of biomass to ACL creating a profit of Rs 50 lakh and an additional livelihood for farmers. The model was implemented in 4 other locations (Chandrapur, Ropar, Kodinar & Darlaghat), and in just 4 years, helped ACL save (USD 200 million) by replacing expensive coal with local biomass. 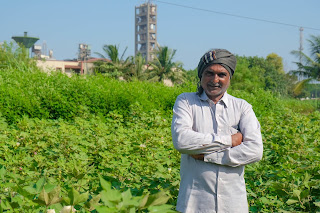 Cotton farmers in Somnath, Kodinar, are moving up the value chain. In 2018, for the first time ever in India, their farmer producer company value-added their cotton, bypassed middlemen, sold cotton bales and delivered the produce (Lint) directly on the Multi Commodities Exchange - resulting in an extra Rs 5.2 profit, per kilo, for every farmer.

Just 7 short years ago, Somnath farmers were each working in isolation, struggling to make farming profitable thanks to overpriced inputs, outdated practices and both market and climate vagaries. But in 2012, Ambuja Cement Foundation organized them into a Farmer Producer Organization to create an easy learning environment, collectively solve problems and jointly procure seeds and fertilizers.


ACF invested in training and capacity building of the members, in accounting and governance to help the company become independent and take firm steps towards sustainability. Up until 2017 SFPCL members were individually selling raw seed cotton to local ginners or middlemen, who would process it in bales to sell in the larger market.


So when the Multi Commodities Exchange reached out to Ambuja Cement Foundation to explore the possibility of farmers bypassing middlemen and selling directly on the platform - Somnath Farmer Producer Company Ltd (SFPCL) jumped at the opportunity to collectively sell their produce.


The Multi Commodity Exchange of India Ltd (MCX) is an independent commodity exchange that offers options trading in gold, and futures trading in non-ferrous metals, bullion, energy, and a number of agricultural commodities.


The Farmers value-added the cotton themselves by investing in processing - resulting in two commodities for sale - both the cotton seed and raw cotton lint. And soon felt confident to play in the larger market by themselves.


In December 2018, 63 farmers from the SFPCL sold and delivered 100 of cotton on the MCX, as a pilot project, with the transaction yielding an extra Rs 2,59,000 more in profit - over and above what they would have got from selling on the traditional market. Additionally, farmers were able to fix and hedge their prices which helps to protect the farmer against market fluctuations.
The pilot spells big things for the future - not only for SFPCL farmers, but for cotton farmers across ACF locations. SFPCL cotton farmers produce approximately 6000 metric tonnes of cotton every year, and so this initiative has the potential to generate an additional 3.12crores of profit for farmers in similar market conditions. ACF is currently engaged with over 1.2 lakh Cotton Farmers across India, so this initiative could be a 'game changer' when scaled up.
Tags: Agriculture,Women,Enabling People
0 Comment
← PREVIOUS BLOG
In Conversation: Secretary of ...
NEXT BLOG →
ACF's battle against Tobacco i...