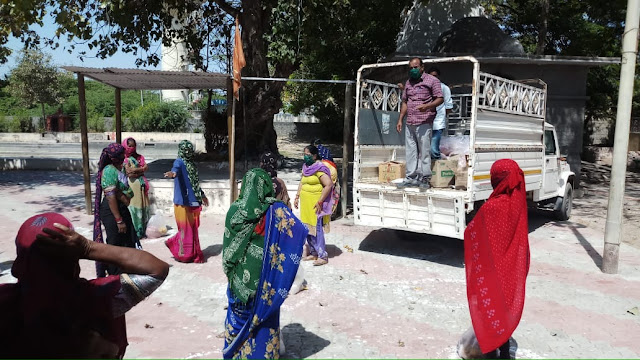 Women from Sorath Mahila Federation have come together to prepare 1200 ration kits for the deprived communities in Kodinar District of Gujarat. Each ration kit includes 7 kgs of wheat, 2.5 kgs of rice, 1 kg of oil and 2.5 kgs of potatoes and is enough to last a family for 4 weeks.
The federation had been managing a Food Grain Bank wherein women who grew grains like Wheat, Rice or Bajra (Millet) would deposit their additional produce. During special occasions or disasters like floods, cyclones, droughts, these grains would then be voluntarily distributed by the same women to deprived community members.
The idea for the ration kits came about when members of the Siddi Tribe approached Motiben, the President of Sorath Mahila Federation, for help in providing them with food amid the current lockdown. In response, the Federation promptly decided to set up a Ration Kit Distribution Centre with 16-17 women coordinators to create the kits.
Within a week itself, the Federation has succeeded in using the resources of the Food Grain Bank to make and distribute 1200 ration kits across 36 villages and is now aiming to make at least 500 - 600 more kits in the coming weeks to reach 35 - 40 villages. They have also hired a vehicle to help them with distribution of the kits in the villages. While preparing the kits, the women make it a point to take extensive precautions by sanitizing themselves, using gloves and wearing face masks.

The women of the federation are opening their hearts to the less privileged in these times of crisis. The contribution of their own food grains is at an all-time high and some of the members have also agreed to use their profits from the welfare fund to purchase more rations.
An award-winning Federation, the Sorath Mahila Federation has 8500 women from 88 villages as its stakeholders and is promoted, supported and facilitated by Ambuja Cement Foundation. The federation is known for its activities in supporting marginal women and their families in the Gir Somnath region of Gujarat. Started as a consortium of different self-help groups in 1999 with the main agenda of financial empowerment, it is today a space for women to be decision makers for the community, voice their opinions and become socially independent. ACF oversees 7 such federations across locations.
ACF has also been involved in creating and distributing ration kits with the help of ACL staff members to the deprived communities around the plant areas.  In Raigarh, Chattisgarh 100 kits were distributed to needy villagers who were 55 kms away from the plant area; and in Rajasthan, 1600 kits were distributed to vulnerable families in both Rabriyawas and Mundwa.