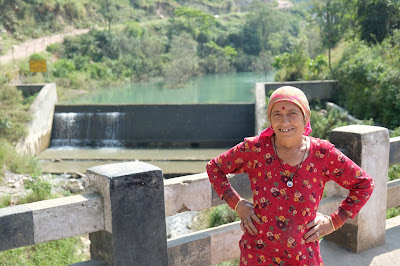 
Himachal Pradesh has a very hilly terrain with high undulating topography where people farm on small patches of land, often on slopes.  Rainfall is also high in the area, and farmers face huge problems due to erosion of topsoil.In Darlaghat, the heavy rains and steep slopes see the erosion of fertile soil - often washing down stream into water storage areas which creates an additional problem, of silting up these harvesting structures. The result is soil erosion, reduced crop production, low profitability of farmers and an overall economic impact on the entire community.

With a similar vision, for generating rural prosperity, ACF approached NABARD to invest in the solution to curb water run-off and reduce its impact as it makes its way down the hills. Together they decided to collaborate on the Dhundhun Watershed Project.

First of all there was a need to create awareness among the people about the dynamics of soil erosion and motivate them to take collective action. And that collective action involved a variety of land treatments - namely the formation of farm bunds to control the run off of water on the surface of the land, and the installation of Gabion structures - all with the aim to reduce erosion be reducing the slope length. This resulted in an increase in green cover, rise in the water table and increase in fodder for diary farming thus making animal husbandry a leading farming practice in the area.

From this project a synergy was formed between NABARD and ACF.  What started as an investment in one small watershed project in 2008 in Darlaghat, today has swelled to investment in 32projects across 11 locations in the areas of Agriculture, Women, Water and Skills verticals - impacting almost 25,000 people.

Poverty in rural areas is complex and therefore integrated approaches are required to uplift the socio-economic wellbeing of community. NABARD and ACF work together on varied projects including organizing rural women into groups for saving and credit. helping digitise SHGs via E-Shakti, and working with farmers to create 6 Farmer Producer Organizations.

It's a natural win win for both organisations and the communities with which they work - and with so much work to do across the country, this collaboration is promising for the future.