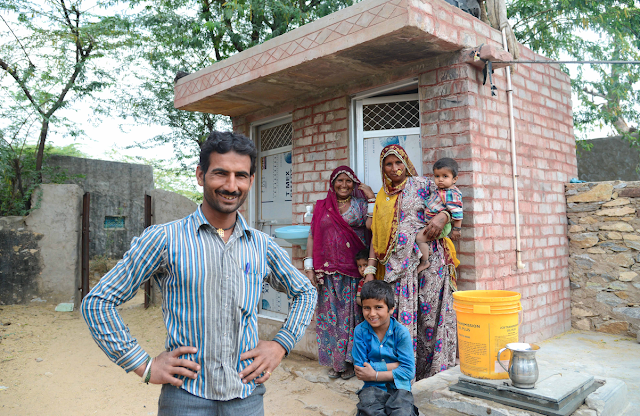 Open defecation and contamination of drinking and bathing water has been an endemic sanitary problem in India. In fact in 2014, around 530 million people were practicing open defecation in India - catalysing the need for a nationwide campaign to improve hygiene and sanitation in India : Swachh Bharat Mission.  Its aim: To eradicate open defecation by constructing 90 million toilets in rural India by 2019.

While the Swachh Bharat Mission provided momentum for rural sanitation across the nation, Ambuja Cement Foundation had taken efforts towards the total sanitation of communities way before the national agenda was launched. In fact it was in 2005 when Gram Swachta Abhiyan was launched by the Government, that ACF initiated its program on Community Led Total Sanitation (CLTS). CLTS initiative was undertaken with an aim of promoting health and hygiene by encouraging toilet construction at a household level.


Whilst efforts to promote CLTS were sustained and showed good progress, data collected through a baseline study of core villages in 2013 identified remaining gaps in households where toilets remained unavailable - highlighting a need for a more intensive intervention. Thus, in 2014, the ACF programme was re-invigorated and realigned with the Swachh Bharat Abhiyan.


As part of this intervention, ACF mobilized entire village communities by creating awareness and motivating families to build toilets - facilitating access to government subsidies to build households toilets. To actively motivate families, ACF also created a unique model with support of Gruh Finance, under which a seed fund was provided to the Federation of SHGs, which in turn used the money to create a revolving fund to help families build toilets.


Efforts took a multipronged approach - targeting women through SHGs and also children in schools.  ACF conducted awareness campaigns in schools, promoting good hygiene practices such as hand washing, and ensured access to safe water and toilets for children. Adolescents were also targeted, creating awareness through Swachta Doots or 'cleanliness ambassadors' who were trained to educate peers and the broader community on improved hygiene and sanitation behaviour.

ACF helped form and empower committees to take care of and drive the sanitation and health issues at village level. CBO and VHSNCs (Village Health Sanitation and Nutrition Committees) were developed and strengthened every year in villages, and the concept of SMART villages was introduced with villages embracing the concept vigorously.

Through their various interventions and camps, the targeted communities now understand the importance of clean water, basic toilets and good hygiene practices for good health and village development.  And this multi-pronged approach has shown results.