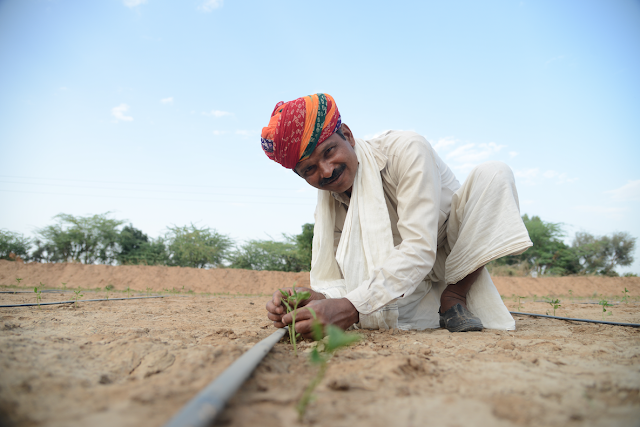 Earlier this year, the Indian government inked a Memorandum of Understanding with Israel to enhance cooperation on water conservation in India - with wastage of water being the critical issue the MOU aims to address.

Together India and Israel will work on developing a five-year plan for cooperation in agriculture and water - a key feature of which is a National Water Conservation Campaign; to put water conservation on the national agenda.

While details of the conservation campaign in India are not yet available, its primary focus will be on water users in the agricultural sector, where most of India's water is consumed through inefficient flood irrigation methods.

The campaign, combined with an agricultural development programme from 2018 to 2020, also part of the MOU, is a tremendous opportunity for India to enhance the skills and capabilities of its farmers in conserving water.

Israel, with its own arid to semi-arid climate, has suffered from severe drought conditions and the lessons gleaned from tackling the issue at a macro level offer key learnings for India.

Faced with a paucity of water a decade ago, Israel began to reduce its consumption through a combination of aggressive campaigns and high tariffs on the usage of water, which were supplemented by innovative water conservation measures. While the campaigns highlighted the country's water challenges, high tariffs were imposed on domestic users of fresh water. The water conservation measures included switching to using recycled brackish water that is safe for agricultural use, switching to drip irrigation and implementing rainwater harvesting methods. The result:  an increased 'water consciousness' among citizens and decreased water consumption. Today, the country stands as a role model for other water-scarce countries to model their agricultural systems on.

India as the world's biggest user of groundwater today, and faces a similar, serious threat from mismanagement of water resources and climate change.  Currently, more than 85% of India's water supply is being used to quench agricultural thirsts - with flood irrigation and unregulated water usage being the main culprits. With a lack of laws and measures in place to regulate water usage, and in many cases, unrestricted access to subsidized electricity by the government to pump water around the clock (approx 2.3crore pumps), most farmers rely on traditional methods of flood irrigation to grow their crops which has only 30-40% efficiency rates as opposed to drip irrigation which has 60-80% efficiency rates.

Ironically, most water conservation efforts in India take place in the industrial and utility sectors, both of which, when combined, consume less than 5% of the nation's water. It is imperative that we recognize the need to shift our conservation efforts to agricultural water use to improve our water reserves.  The India-Israel partnership and campaign aims to address this.

A little closer to home, Ambuja Cement Foundation too, has found that the promotion of drip irrigation and a collaborative approach to tackling large scale water problems, is the solution to the looming crisis India faces.  Having successfully led multiple collaborative efforts, including pushing salinity back to the coastline in large tracts of coastal Gujarat, ACF believes that a multipronged approach and collaboration is the way forward.

"Working hand in hand with the Community, Government and Corporate stakeholders, we found the scale and might that we needed to turn a dire situation around for the 200,000 people living in the Kodinar region.' says Pearl Tiwari, CEO of Ambuja Cement Foundation.

She further says, "Whilst at least 21 Indian cities are expected to move towards zero groundwater level by 2020, the hardest hit by the water crisis, are the rural poor.  Already we have the unenviable title of having the greatest number of people living in rural areas without access to clean water - 63 million."

About India's alignment with Israel on water conservation efforts, she says "There is a need to learn from Israel and take a united approach to scale up efforts to turn India's situation around.  We want to play a key role in sharing our learnings and driving such efforts."