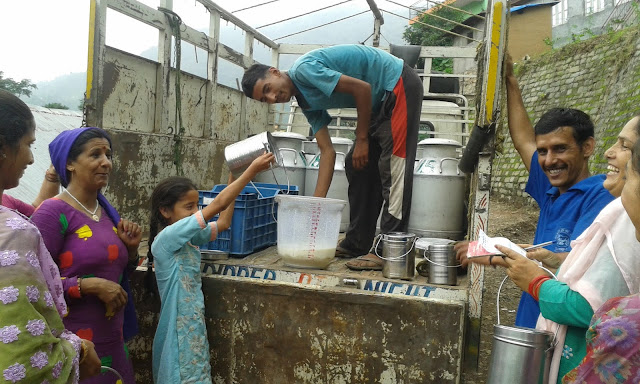 Dairy plays a crucial role in the rural economy of the country with high potential to generate income and employment. The nation's milk supply comes from millions of small producers (around 70 million rural households) viz. landless labourers and marginal, small, medium, and large farmers. Increasing demand for milk and milk products in recent years has intensified dairy farming as a profitable enterprise for rural women also.

According to the census of 2011, Himachal Pradesh is a mountainous state with mostly terraced cultivation. It is one of the least urbanized states in the country with 89.97 % of its population living in rural areas. There is a large dependency on agriculture & horticulture which provides direct employment to about 62 % of the total workers in the state. Agriculture and allied activities dominate the rural livelihood of the state population.

While agriculture in hilly regions of Himachal Pradesh is highly rain-fed and subsistent by nature, age old traditional practices combined with small and fragmented landholdings have made agricultural occupations non-profitable and unpredictable. The mountainous terrain poses many challenges for farmers and communities. Poor crop productivity, low availability of per capita arable land, highly fragmented land holdings, low retention of water due to sloped terrain, inefficiency in manually performed farm operations, distraction of modern youth from conventional agriculture and non-viability and lack of other income-generating activities are some of the issues plaguing the region. These obstacles have made the rearing of dairy animals an economic compulsion in Himachal Pradesh.

Coupled with crop farming, dairy farming offers a steady source of income and has been proved to be an effective tool in upgrading the economic status and quality of life of farmers. While Rural women perform more than 90% of dairy operations as an extension of domestic activities, lack of awareness & education and problems in marketing of milk deters them from taking it up as a source of livelihood.

ACF works with the community in Darlaghat, Himachal Pradesh. The population here, is scattered across remote locations and belongs to low income groups with low breed cattle.

ACF's Intervention with the Community

ACF observed a huge gap in understanding of proper practices, knowledge, and availability of timely support (treatment & care) services for livestock. With only 1 doctor allotted for 10 veterinary dispensaries and a difficult mountainous terrain, cattle health was severely impacted and increased the number of cattle deaths. Also, keeping in view the economic backwardness of the region and the limited opportunities available, the foundation took a conscious step to initiate the Pashu Swasthya Sevika (PSS) programme in Darlaghat. A cadre of women volunteers from local communities were offered to be trained in animal husbandry through a hand-holding process to enable them to address basic health, hygiene, feeding and fodder management issues in the surrounding villages. These women volunteers further started functioning as a Self-Help Group (SHG). Initially 15 women joined hands which later increased to 23 women in the span of a year itself. The women were chosen to cater to all the underserved villages in the flung areas of Darlaghat and to make available first aid to the animals in case of emergencies. They were imparted various trainings, including feed & fodder management & hygiene services for cattle. The women were also provided with a considerable number of exposure visits in the area. With this valuable training, the PSS started creating awareness in surrounding villages, providing treatment to cattle, and improving their health. 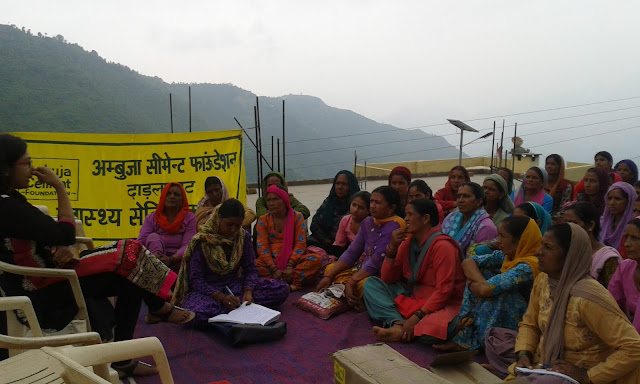 In 2010-11, ACF had several meetings with the PSS and identified that women in Darlaghat were facing financial issues and wanted to support their families. 'dairy farming' was identified as a viable livelihood opportunity for the local women. Milk collection was anyway being practiced at a household level. Subsequently, women started collecting milk and started selling at local level.

The cows in the region, however, were observed to be not producing enough milk. To address this, an Artificial Insemination programme was initiated to create cross breed cattle producing higher milk quantities. This happened through support from the local government.

In 2013-14, each village collected 15-20 litres of milk per day, giving rise to the idea of marketing it further. The SHG collaborated with a local dairy called Kaamdhenu' with help from ACF. Various meetings were conducted, and training was provided to the SHG to further increase their dairy production. In 2015-16, women started producing 1500 litres of milk per day. The SHG now decided to market the milk and milk products through their own milk producer organisation. In February 2016, 'The Amrit Dhara Milk Producers Marketing Co-operative Society Ltd' was registered.

Since 2003-04, ACF has partnered with NABARD on various projects running in Darlaghat. Moreover, it has supported 50 Self Help Groups with credit linkages.

Until 2013-14, women and farmers were facing many issues with respect to marketing and sales of their products. In due course, the central government passed guidelines to allow collective groups of farmers to produce, promote and market products through farmer producer groups.

Post registration of the milk cooperative in 2016, NABARD sanctioned Rs. 9.6 lakh towards strengthening and promotion of the cooperative.

Today, while the women focus on the production of milk, marketing and credit sanctions are handled by NABARD and ACF provides training and handholding. ACF also conducts monthly meetings with the cooperative for progress updates and offers solutions in case of any issues, both financially and otherwise.

Testimonials from the women:
Expansion of the Project

The Amrit Dhara Milk Society has many initiatives planned to expand the scope of milk production. These include: - 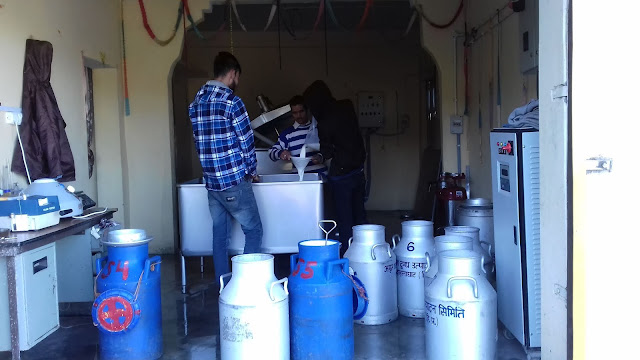