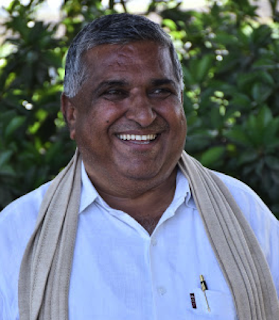 Today, Oghadbai K Dodiya is an important person in his village.  Not only is he a forester in the Government Forest Department, but he gained additional trust and reputation when he helped solve the drinking water crisis in Dhamlej - his village.
In 1999 he was the first to adopt a Rooftop Rainwater Harvesting System, which he invested in with the support of Ambuja Cement Foundation who also provided a subsidy.
Prior to construction, his 9-member family (along with the rest of the village) had to dedicate most of the day fetching up to 100 litres of water from the nearby well to meet the daily needs.
Additionally, the water was saline and created a variety of health issues for members of the community such as fever, high blood pressure and digestive diseases.
Seeing the success of the RRWHS in his own house and farm, he took it upon himself to convince the rest of the village to make a similar investment.  Today over 45 RRWHS have been built in his village, with support from ACF.
"All water, which is God's gift and is fallen over our roof, isn't allowed to leave my house!" Oghadbai said as he breaks into a broad smile.
ACF IMPACT - 137 Rooftop Rainwater Harvesting Systems built in Dhamlej Village, Gujarat.
Tags: Prosperity,Water,Enabling People
0 Comment
← PREVIOUS BLOG
Non-Communicable Diseases - A ...
NEXT BLOG →
Partnering for Livelihoods