Immunization & Institutional delivery by ACF Farakka during lock down 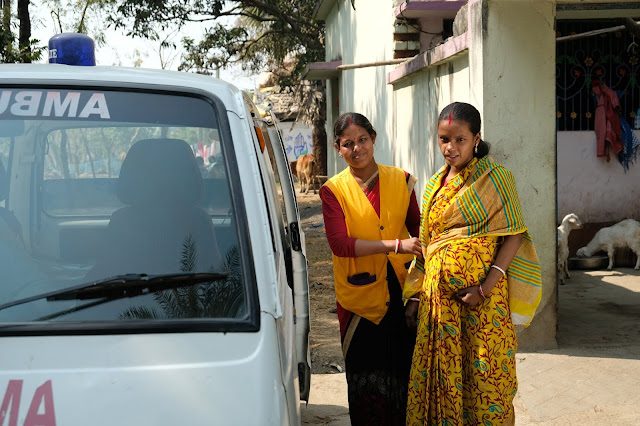 India's nationwide lockdown, due to COVID-19, has taken a toll on the immunization of children across the country with most new borns missing the scheduled vaccinations in the first phase of the lockdown. Routine immunization was suspended temporarily at the end of March after a directive from the Health Ministry. However from the last week of April 2020 the Government of West Bengal gave permission to immunize children and the ANC mothers with clear mention of social distancing.
As per government guidelines, only 20 vaccinations could be done per Village Health Nutrition Day. With a need to organize more VHND, the problem emerged that not enough staff were available at sub-center level to organize the events. During this situation ACF's Health Sakhis began helping Government line department staff to organize VHND at our core villages. Whilst ANMs are engaged in vaccination mainly, they were facing difficulties for documentation, weight calculation, BP screening, Sugar Testing, HB screening among other things.
And so ACF's Sakhi's stepping in fill the gap and support ANMs in vaccinating children - also ensuring 100% attendance at VHND from those who were present at the village. Whilst village people faced fear due to COVID-19, Sakhi's provided awareness through various Audio/Video messages, distributing masks and sanitizers and finally they are being able to bring them and their babies to the sub - center for immunization.
Though the total target was 233 immunisations during this period, Sakhis were able to achieve 200 which was 85% of the total target. The rest could not be reached as 28 beneficiaries were out of station and could not reached due to lockdown and another 5 could not get vaccine due to their poor health condition. The Sakhis assured to get all of them immunized as soon as the situation will be under control.
o   Sagira Bibi from Dohitpur village shared: "My child age is 10 months and her name is Sahana Khatun. I was afraid that my child will not get her scheduled immunization. I contacted with private nursing home, but they also refused us. Sakhi Ajija Bibi contacted me and arranged vaccine at the centre and my child got measles vaccine on time."
o   Pratima Kisku from Kalaidanga village shared: "My baby's name is Ankita Hasda and her age is 9months. Sakhi didi at first informed me about today's VHND session, but I forgot about it.  Then again Sakhi didi came to my house to provide mask and sanitizer to me and I visited the sub-center with her."
o   Pinki Mandal from Dohitpur village shared: "Sakhi didi informed us about the immunization camp, but my family and I were terrified because of the way Corona was on the rise. Then Sakhi didi told me that they will arrange the camp properly by maintaining social distancing and will provide hand sanitizer. Then she visited Sub-center and her child got DPT-2, MR-2, and JE-2."
Additionally in April 2020, 24 deliveries took place and despite the lockdown, health Sakhi's helped to manage 22 institutional deliveries, which was 91% of the total delivery target. During lock down in April 2020, when the ambulance did not want to come to the village, SAKHIs called the health official directly and arranged a free ambulance for the ANC mothers. When the women of the village were in fear of COVID-19, SAKHIs were providing awareness on Corona virus, provided masks, sanitizer and personally took them to the hospital to help them with safe delivery.
After safe delivery they are visiting the home of PNC mothers and taking care of both mothers and children undertaking measures like weight measurement, breath calculation of new born and also training mothers to take care of new born babies. The SAKHIs are doing these activities after maintaining proper guidelines and precautions like wearing mask, sanitizing properly and maintaining social distance for Covid -19.
o   Samima Bibi from Ranipur Village was at a remote village of Jharkhand in her maternal home during lockdown where there is no facility of hospital. Then her local Sakhi counseled her and made her agree to come to Ranipur village for safe delivery. The Sakhi called the ambulance but the driver disagreed to go to the village of Jharkhand. Then Sakhi didi paid 200 rupees to a driver from her own village and brought Samima to the Arjunpur hospital. But as her BP level was very low, the doctor referred to Jangipur SD Hospital and there she delivered a baby girl safely.
o   Ansuri Hembram wife of Samar Murmu from Kolaidanga Village reported that her husband who was a migrant labor was at Hyderabad and could not come back to home due to lockdown. In this period Sakhi regularly visited her home and took care of her. And then accompanied her to Beniagram hospital when she was facing labour pain and there she delivered a baby girl safely.
Tags: Health,COVID-19
0 Comment
← PREVIOUS BLOG
Kitchen Gardening turns into a...
NEXT BLOG →
SAHAYA Loans Support SHG Livel...