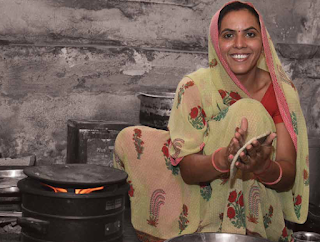 Gruh Finance Ltd. is one of India's leading Housing Finance companies focusing on housing loans to rural India. The company's CSR philosophy is to serve socially and economically weak sections of society especially in the most underserved areas where there is a complete absence of infrastructure and opportunities
Ambuja Cement Foundation commenced a partnership with Gruh Finance in 2015, providing support to the Women's Federation in Chandrapur (Maharashtra), 'Ekata Mahila Swayam Sahayata Sanstha'. With the launch of Swachh Bharat Mission in 2014, the Federation decided to take a leadership role on tackling sanitation challenges in Rajura and Korpana blocks, two of the most backward blocks in Chandrapur District. A mere 20% of the population in these blocks had any access to basic toilet facilities; and of this miniscule population, less than 10% were usable. The women members took the lead in creating awareness about sanitation and hygiene, and seeing the efforts being made by the women and their confidence in tackling this issue, Gruh Finance stepped in as a funding partner to support toilet construction. A grant was made to set up a revolving fund to provide loans at a nominal rate of interest to build toilets. The target was challenging, but one that the women were equal to, taking the lead on making their villages open defecation free.
The federation members took responsibility of constructing toilets in their homes first, thus motivating and paving the way for others to do so.  By 2018, the Federation had revolved the grant more than twice over, as the total value of work achieved on the ground is more than double the initial fund value. More than 95% of the toilet construction target has been achieved thus far and is expected to be completed this year. The revolving fund will now remain vested with the Federation to provide loans for income generation activities for the women, renovation of huts into pucca structures and construction of rooftop rain water harvesting structures.
In June 2016, Gruh Finance commenced funding support to ACF's Skill & Entrepreneurship Develop Institute (SEDI) at Chandrapur (Maharashtra), further scaling this partnership to two additional SEDI's at Bhatapara (Chattisgarh) and Chindwara (Madhya Pradesh) under the 'Employability through Skill Initiative Project (ESIP)'. ACF's SEDI centres are located near areas which have witnessed industrial growth over the past several years with a steady demand for skilled personnel. However the local youth and working age population were unable to avail these employment opportunities due to their lack of requisite education and vocational skills. This skill gap led to a paradox - where industry had to bring in skilled personnel from other states and local youth had to engage in unskilled jobs due to lack of opportunity and access to vocational skill training. The 3 centres now train youth in trades such as Retail, Electrical Repair, AC Repair, Masonry, Manual Metal Arc welding, Fitter Fabrication, Nursing General Duty Assistant and BPO Training amongst others. Since commencement of this partnership the project has successfully trained 777 rural youth, 78% of whom have been employed in the organised sector; another 1160 youth are expected to be trained by Oct 2020.
ACF and Gruh Finance is an outstanding example of what can happen when two like-minded organisations join hands and pool their strengths to generate change in grassroots India.  ACF looks forward to continuing this fruitful relationship for many years ahead.
Gruh Finance is now known as Bandhan Bank
0 Comment
← PREVIOUS BLOG
ACF Celebrates ‘Hat-trick’...
NEXT BLOG →
Gandhi on Rural Livelihoods & ...