Regular monitoring is an integral part of ACF's operations and our Monitoring Indicator System (MIS) is designed to capture both qualitative and quantitative feedback based on program outputs - which is used for mid-course correction, improvising projects and designing programs' strategy.

For ACF, MI is a crucial component in all its programmatic interventions and plays a key role in effectively reviewing the projects and designing strategies for all its interventions.
For our Skill & Entrepreneurship Development Institute program too, MIS has played a key role in enhancing project effectiveness and sharpening vocational skills of rural youth. Through 'Thrive' we are sharing two examples from SEDI where MIS has helped bringing improvisation in the skill training program.
SEDI Sankrail 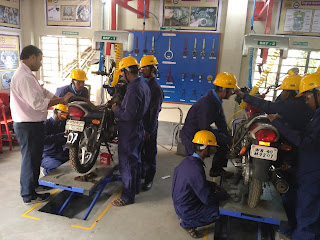 Sankrail is the industrial locations and hence there is a constant need of mechanics, especially for the two- and three-wheelers. In this context, ACF started a project to train rural youth in two- and three-wheeler repairing and after the first phase of the project, employers' feedback was captured in MIS.
Whilst feedback showed that the overall attitude and knowledge of SEDI youth was good, they were still not very well versed with new technologies - there were several new models in the market on which SEDI students needed better practice.
After reviewing the feedback, ACF developed a plan to establish a high-end laboratory with newer models and equipment, better organised systems and processes that aimed to give students the sense of a real workplace.  Till date more than 200 trainees have been trained using this facility and employers' feedback is encouraging and has given more confidence to funding partners to collaborate with SEDI Sankrail.
SEDI Nagaur 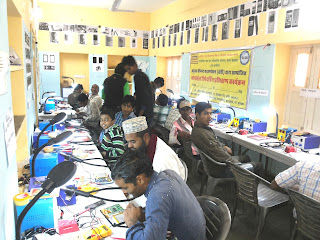 Youth mobilisation and community meetings are important part of our SEDIs, and in one such meeting in Nagaur, feedback from community was that there there was a strong need for vocational training courses for disabled youth.
ACF's management and SEDI team collaborated with Pt. Deendayal Upadhyaya Institute for Physically Handicapped to start a course for the differently-abled in mobile repairing.
To promote entrepreneurship, the graduates who immediately set up their enterprises were provided with a financial support of Rs 100 per graduate per day for one month.  In the first batch, 60 youth were trained, of which 57 started with their businesses.
Impressed with the success of the project, Pt. Deendayal Upadhyaya Institute for Physically Handicapped collaborated with ACF yet again to train 90 more youth which were divided into 30 each for each SEDI centre in Rajasthan - Nagaur, Chirawa and Jaitaran.
0 Comment
← PREVIOUS BLOG
Girls as Breadwinners!
NEXT BLOG →
ACF Gears Up for Silver Jubile...