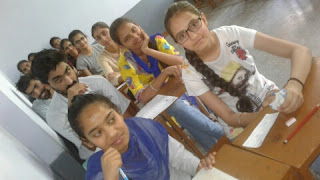 AMK students have consistently managed to defy social taboos and stereotypes associated with intellectual disability. And they've done it again!
Six students from Ambuja Manovikas Kendra sat and passed their standard 10  exams under the National School of Open Schooling (NIOS).
It is a proud moment for the entire team of Ambuja Manovikas Kendra and Ambuja Cement Foundation, as all students scored 60% or above in the exam - and that too in their very first attempt.  This was also the first time that AMK decided to prepare students for NIOS.
AMK students have proved their mettle in defying the odds on several occasions, including winning medals at the prestigious World Special Olympics.
Kudos to the AMK staff for their rigorous, relentless efforts to make students exam-ready.
Tags: Education
0 Comment
← PREVIOUS BLOG
ACF Gears Up for Silver Jubile...
NEXT BLOG →
First Vocational Centre for Di...