Shamsher Singh (24), a student from Ambuja Manovikas Kendra in Punjab, bagged two medals at the Special Olympics World Winter Games hosted in Austria in March 2017 - proudly bringing home a Silver and Bronze in Snowshoeing (100 m race and 50 m race respectively) for his performance.
Other impressive performers included Neha, who was part of the Indian Floorball team that finished at sixth place.  Aged just 16, Neha enrolled at AMK in 2011 and has blossomed as a result over the last 6 years.
Commenting on the success of the athletes, Mr. Suresh Thakur, Principle Ambuja Manovikas Kendra, said "It is a proud moment for the team at Ambuja Manovikas Kendra.  These accomplishments go a long way in reiterating that India's special athletes are highly talented and capable to compete not only in India, but also on bigger global platforms." He said.
"These success stories inspire the team at Ambuja Manovikas Kendra to invest more in training to equip our students for national and global scale sporting events." Mr. Thankur exclaimed.
Ambuja Cement Foundation's AMK students have won many medals in different competitions before - including titles in Punjab State Olympics for 11 continuous years and bringing home a haul of 13 Olympic Medals from the last five World Special Olympic Games in Dublin, Greece, Athens, Los Angeles and Austria.
AMK is the only facility for special children in the entire district of Ropar filling the gaps in essential services towards them. At present the school caters to 106 children, all broadly fitting into the category of mentally challenged, and provides them with a conducive environment tailored to meet individual developmental needs. 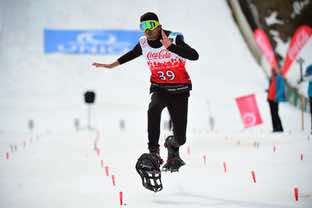