Strength in Numbers: Reducing 'Homesickness' with Group Placement at SEDI 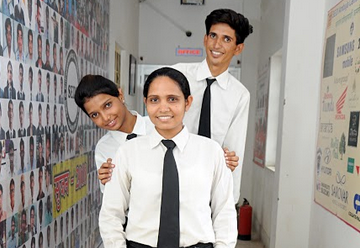 Dinesh Patodiya was feeling homesick.  He felt lost in the city of Jodhpur and whilst he loved his new job, he was struggling outside of work.  Within 3 months, he quit and headed for home.

In fact, many of the youth who enrol at ACF's SEDI have never left their village before.  They come from remote, isolated communities. Parents were also reluctant to send their daughters out alone for jobs.

Team ACF knew that they must find a solution.  Because the bright future of their graduates was at stake.  They started brainstorming - why not try to place graduates in groups?  With similar backgrounds, they could support one another and share resources.

And so they initiated dialogue with companies who would agree to take 2 or more graduates at a time.  But finding a suitable company was no easy task.  Finally, they convinced high attrition industries with the concept - Pizza Hut, Genus Electrotech and Kokilaben Dhirubha Ambani Hospital came forward to trial the idea.

Today, Ambujanagar SEDI alone has placed 170 electronic students in Genusâ€‹ via group placement - with trainees performing so well that in the last batch of 28 girls, ACF re-negotiated the starting salary (from Rs 7800 to Rs 8800 per month.)

And Dinesh? He moved to Mumbai with 3 batchmates, and after a stint at Ambani Hospital, progressed into a more senior position in Ganganagar. The security of the group helped him make the most of life in 'maximum city' - using it as a launch pad for his career.

The overall results? To date, a total of 3348 trainees have been placed through group placement, and retention rates have increased from 58% to 87%.
Tags: Skills,Enabling People
0 Comment
← PREVIOUS BLOG
Electronics for Girls: Tacklin...
NEXT BLOG →
INDIA: The Top 5 Challenges in...