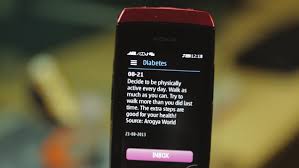 ACF in partnership with NGO Arogya World, launched the m-Diabetes App across all locations as a major initiative in its effort to impact Non-Communicable Disease via behavior change of 2lakh people over the next 3 years across ACF communities.
Arogya World's mDiabetes App was designed in regional languages (Gujarati, Marathi, Hindi, Punjabbi, Bengali) as a population-level nationwide public health intervention that uses mobile technology to motivate improvement in diabetes risk behaviors, to increase awareness about the cause and complications of diabetes and preventive measures.
The program, launched by Arogya World in 2011, has over one millions users who have opted to receive a series of culturally adapted text messages. Mobile phones are widely used in India, throughout different geographic regions and all socio-economic backgrounds. There are said to be about 900 million mobile phone users in India.
A voice only model, designed to create awareness amongst the community in 4 key areas (1 - medical scientific information, 2 - Lifestyle, 3 - Diet, 4 - Physical Fitness), with a focus on prevention, risk factors and proper lifestyle modifications to prevent diabetes, has been developed to tackle issues with literacy.
The programme effectiveness has been assessed by comparing responses of a subset of consumers, based on telephone interviews, before and after they received the messages and also by comparing them with the responses of a similar number of consumers who did not receive the text messages. It was found that consumer awareness of diabetes and its complications increased, and a promising trend in behavior change was noted in both urban and rural areas and in North and South India.  As a result, 20% of participants improved their health behaviors after participating in the messaging campaign.
ACF and Arogya World share a common vision for tackling NCDs in rural communities, by influencing behavior change.  By collaborating together, the two parties combine their strengths and can effectively reach out to more vulnerable communities as a result. The initiative is being rolled out by ACF's trained Sakhis as part of the Health programme, who are introducing the free mDiabetes program to community members and encouraging them to participate.
"ACF brings to the table a network of Sakhis, trained community health workers who influence and serve remote vulnerable communities across our locations." Said Vinayak Sonawane who leads ACF's Health Programme.  "Arogya World has developed a research backed tool which we are using with baseline, midline and endline study, to help educate grassroots communities, in culturally sensitive and relevant ways.  It makes good sense for the two of us to collaborate and work together." He said.