For the women of Farrakka, chickens were bad news. Many of them had lost large sums of money investing in poultry farming with encouragement of the Government - but with limited support, training or veterinary services, the efforts were disastrous.
So, when ACF came along espousing the benefits of rearing chickens, the women literally ran them out of town! They'd been down this road before.
After all, they were happily earning money from rolling Bidi's, even though the toxic fumes and dust from the process was impacting their health. At least their families could eat! Not to be defeated, ACF persevered. There were arguments and fights. Disagreement among the women. Doubts prevailed. Staff were ridiculed by women at village meetings. The going was tough.
But having seen the success of chick rearing in other blocks, ACF staff continued to push. Finally, 4 women came forward and agreed to give it a try.
Activity started with 2060 chicks with an investment of Rs. 93,137/-. The pressure was on - this trial just HAD to work.  To ensure success, the ACF team visited the poultry farms thrice daily to regularly monitor the progress. At the end of 21 days, the group sold 3000 chicks and made a net profit of Rs.26,863/- within just 21 days. Other women gathered to hear the results - and after a long silence, slowly a smile spread over each of their faces.
Over the next 16 months, nine batches reared 39,625 chickens and hauled in a profit of Rs.4,32,176/-.
Today the group acts as 'mother NGO' to teach other groups and districts chick rearing, and poultry is now the most important income generation activity for rural women in Farakka. 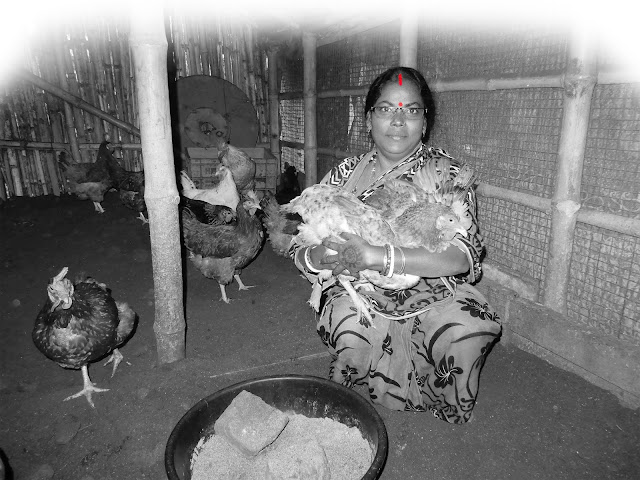