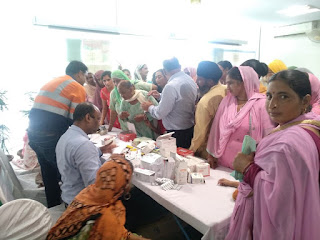 ACF Nalagarh recently organized a general health camp with an objective to provide general health check-up facilities to rural populations for reproductive health, eye strength, and blood sugar / haemoglobin levels. The doctors recommended treatment to those who required and distributed free medicines.
The camp started with an inauguration by Arun Jha (Unit Head - Ambuja Cements Limited Nalagarh). After the inauguration, the camp proceeded to address the patients, educating them about non communicable diseases and discussing ways in which they could be circumvented. Dr Gagan (Deputy Program Officer - CMO Solan) and Chaman Lal (Health Educator - BMO Nalagarh) gratified ACF's effort and promoted the significance of adopting a healthy lifestyle to prevent the onset of NCDs.
People showed up in great numbers with a recorded 348 registrations. 104 blood sugar and haemoglobin tests and 43 gynaecology tests were conducted. Out of 102 eye tests, 40 cataract cases were referred to the community health center in Nalagarh.
The camp was also meticulously audited as per government health department norms by Laik Ram who was deputed by BMO Nalagarh. On being asked for his feedback, he was quoted saying, "The efforts put in for organizing the whole camp were unfaltering. Biomedical waste which was generated was disposed appropriately. Senior citizens were provided with pick and drop service. Free medication facilities were also available. I had not expected people showing up in such great numbers, which made it difficult to manage the rush of patients, but everything was handled in an orderly way. Such camps should be organized more often to facilitate help to the rural population."
Tags: Health
0 Comment
← PREVIOUS BLOG
Health & Safety Ensured for Sk...
NEXT BLOG →
Celebrating 'Children's Day' i...