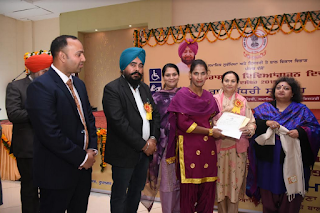 There were celebrations at Ambuja Manovikas Kendra (AMK) when it's very own Ramandeep Kaur was felicitated with the Punjab State Award for the Best Self-Employed Person with Disability in the female category 2019.
Ramandeep runs her own home-based jewelry business where she earns an average of Rs.20,000 per month making different products at home and selling them at festivals like Diwali and Rakshabhandan.  - supporting her self-reliance and sustainability.  She set up the business on the back of a one-year training course at Ambuja Manovikas Kendra's Skill Development Rehabilitation Centre in 2018, where she learnt artificial jewelry making, including decoration items and Rakhies.
But this is just one of many accolades and achievements for Ramandeep, thanks to the support and guidance received by Ambuja Manovikas Kendra and her family.  With a very low-income family background and a challenging upbringing, Ramandeep Kaur was rejected by many schools due to her poor performance and problematic behavior. It was only when she joined Ambuja Manovikas Kendra in 2005 at the age of 11 years did she find a new path towards life.
Special Education and personal focus was provided to make her feel comfortable and control her behavior in this new environment. With rigorous efforts put in by the training team, she began improving her personal, social and academic skills. She was enrolled into pre-vocational skills like cutting, tailoring and cooking which she developed an interest for and eagerly looked forward to attending school regularly. As the team gained confidence in her, she completed her secondary class from NIOS in the session 2016-17.
Ramandeep Kaur was also recognized for her capability in athletics. In 2006, she participated in the 9th Punjab State Special Olympics and won three gold medals for AMK with bagging the title of Best Female Athlete. She continued to participate in district, state and national level sports championship which led her to represent India in the Special Olympics World Summer Games in Athens in 2011 and won laurels for the country. In 2018, Ramandeep Kaur was also part of the Indian Unified Female Football team and participated in the World Cup held in Chicago.
Her story is an inspiration and well deserved to win the state award, which was handed over by Smt. Aruna Chaudhary, Women & Child Development Minister, Government of Punjab on the occasion of World Disability Day.