Walking With Gandhi Towards a Clean India 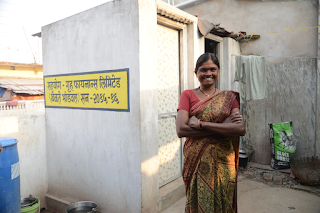 Mahatma Gandhi gave equal importance in terms of effort invested, to his mission to secure Independence for India, and his vision for a 'clean India'.  Though he was successful in gaining freedom for the country, his dream for sanitation was left unfulfilled.  Inspired by the Gandhian way of living, ACF has made cleanliness and sanitation an integral part of its health program and have worked in various ways to accomplish it.
In his book Navajivan 1925, Gandhi wrote "I shall have to defend myself on one point, namely, sanitary conveniences. I learnt 35 years ago that a lavatory must be as clean as a drawing-room. The cause of many of our diseases is the condition of our lavatories and our bad habit of disposing of excreta anywhere and everywhere. I, therefore, believe in the absolute necessity of a clean place for answering the call of nature and clean articles for use at the time." With this thought, ACF in collaboration with communities, community based organizations, Self -Help Groups and Federations has achieved a 100% toilet coverage in 146 out of 227 villages, with the remaining villages achieving 80% coverage. This is the result of extensive sanitation drives in villages with a major focus on the importance of constructing, and using, a toilet in every household.
In South Africa, Gandhi would visit Indian homes and encourage to keep their homes and surroundings clean. He also spoke about it at public meetings and wrote newspapers articles. He believed that habits learnt at a young age get embedded into one's personality.  Along this line, ACF is training teenagers across its core villages to play a key role in educating peers in health and sanitation. ACF has trained over 842 peer educators across 10 locations - generating a reach across 22,599 adolescents.
Children play a vital role on such issues not only in the present generation but also in the future generations. If children pick up the message effectively at a young age then this shall improve holistic health. Thus ACF launched the program Swachhata Doots also known as Cleanliness Ambassadors who are trained to play a pivotal role in monitoring and educating peers and community on hygiene and sanitation behavior at village and school levels. Across locations there are 150 Swachhata Doots spreading awareness in 105 villages.

Gandhi and his group of party men and women would visit Harijan quarters taking with them brooms and spades. While Gandhi would talk to the people about the necessity of sanitation, his people would begin cleaning up the area themselves. This year, Gandhi's Birthday was celebrated with an initiative called 'Swachh Hi Seva' launched under the Swachh Bharat Mission. The main theme of the campaign was on Plastic Waste Awareness and Management with activities being conducted in all our locations. While our people raised awareness about recycling and reuse along with the need to refuse, and boycott plastic, some of the others including children were on ground with their brooms and spades cleaning up the villages. One ACF village also took an Oath to keep the village clean. 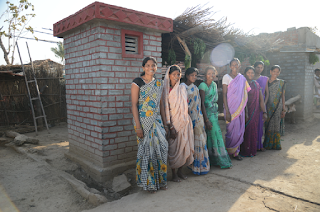 Focusing on Sanitation has led to Kukudsath village in Chandrapur Maharashtra being declared a 'SMART Village' as per government norms and awarded Rs. 10 lakh cash prize. Kukudsath and Mangi villages were also awarded the Santh Gadgebaba Gram Swachhata Puraskar for creating good Sanitation practices and cleanliness within the village. Motivated by these results, other ACF villages are also taking efforts to achieve the status of a 'SMART VILLAGE'. SMART Village is a concept adopted by national, state and local governments of India, as an initiative focused on holistic rural development, derived from Mahatma Gandhi's vision of Adarsh Gram (Ideal Village) and Swaraj (Self Reliance).
Mahatama Gandhi took it as his own individual personal agenda to achieve the change he wanted to see and it is our own duty to take his vision forward.  At ACF, we have made it our agenda to make as many villages Open Defecation free and to encourage the communities to keep their surroundings clean - not only for the health of our communities, but as a small contribution to helping achieve Gandhiji's vision for a 'Clean India.'
Tags: Health
0 Comment
← PREVIOUS BLOG
Gandhi on Rural Livelihoods & ...
NEXT BLOG →
Self Reliance Via People's Ins...